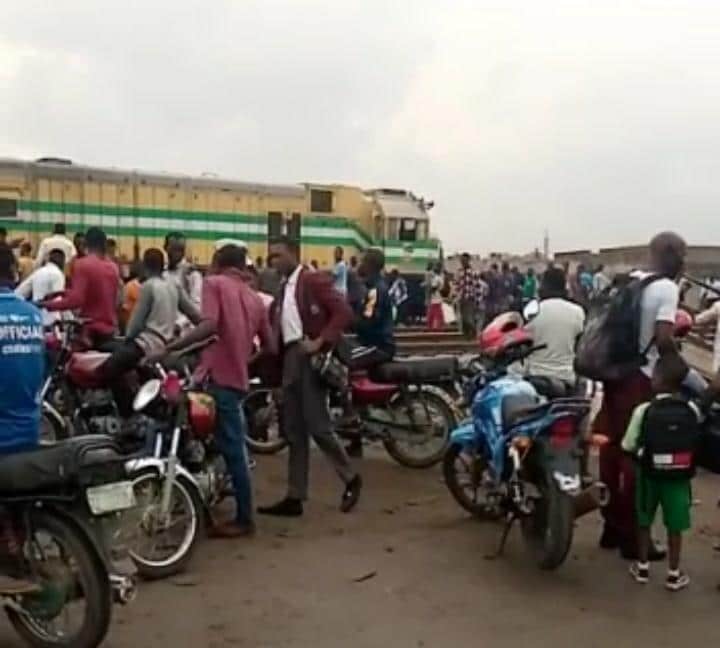 A train has collided with a loaded trailer at Iju-Ishaga, Jonathan Coker Road Level Crossing in Lagos. Witnesses told TheCable on Monday that a tricycle was also crushed by the truck. The tricycle rider survived the accident.

Volkswagen, a German automaking brand has decided to delve into flying vehicles in China, according to CNN this would make the brand the latest automaker to probe possibilities of personal air travel. In a statement on Tuesday, the Europe’s Largest automaker made it known that “vertical mobility” could be the […]

John Boyega, Chadwick Boseman are part of the nominees for the 78th edition of Golden Globes billed for February 28. Boseman, who died of colon cancer last year, got a posthumous nomination for the ‘Best Actor in a Motion Picture’ category for his role in ‘Ma Rainey’s Black Bottom’, a […]

The FCT Administration spent N28.5bn to tackle the coronavirus pandemic within Abuja, especially during the lockdown. This disclosure was made by the Minister of Federal Capital Territory, Musa Bello, on Tuesday while briefing members of the Senate Committee on FCT. The minister while presenting the revised 2020 budget of the […]

Real fans will get it.

Jonah’s in a whale, but he’s not alone.

A surf rock audio drama about the end of the world.

Maybe you’ve heard of her brother?

Nobody told her about a pandemic.

The Best Truth Story Ever (so far)*

*as voted on by listeners.

Our listeners discuss their favorites.

I just have a few notes.

US surgeons have successfully implanted a heart from a genetically modified pig in a 57-year-old man, a medical first that could one day help solve the chronic shortage of organ donations. According to a statement on Monday by the University of Maryland Medical School, the “historic” procedure took place last […]

North Korea fired a suspected ballistic missile into the sea on Tuesday, with South Korea’s military warning the second such weapons test in less than a week showed clear signs of progress. The early-morning launch came as the UN Security Council met in New York to discuss last week’s test […]

The national leader of the All Progressives Congress, APC, Asiwaju Bola Tinubu on Monday said that he has informed President Muhammadu Buhari of his ambition to contest for the position of president in 2023. Asiwaju Tinybu revealed that it was a lifelong ambition and that he has the confidence, the […]

The US Secret Service arrested a 72-year-old man in New York on Monday after he allegedly phoned them threatening to kill ex-president Donald Trump, a criminal indictment showed. Prosecutors in Brooklyn say Thomas Welnicki “knowingly and willfully threatened to kill, kidnap, and inflict bodily harm upon” America’s former president. It […]

Zimbabwe’s President Emmerson Mnangagwa on Monday fired his state security minister Owen Ncube for “inappropriate” behaviour, his office announced. In a terse statement, Mnangagwa’s office said the president “removed (Ncube) with immediate effect for conduct inappropriate for a minister of government”. No further details were given. Ncube who got appointed […]

A four-year-old girl has died due to a bouncy castle accident last week in eastern Spain, the second child to die after a gust of wind blew away the structure, local officials said Monday. Another seven children were hurt after they fell from the inflatable bouncy castle on January 4 […]

Kaduna State Government has directed all public schools in the state to run only four working days a week, between Monday to Thursday as against the usual five working days. The directive was given by the state Commissioner for Education, Halima Lawal, in a notice for school resumption for the […]

Ahmed Musa: AFCON 2022 Will Be My Last For Eagles

Super Eagles skipper, Ahmed Musa, says the ongoing 2022 Africa Cup of Nations (AFCON) will be his last for Nigeria. He spoke on Monday at a pre-match conference ahead of the group D opening game against Egypt on Tuesday. Musa, who doubles as the Nigerian national team’s most-capped player, also […]

Federal Government has said its 2050 Long-Term Vision (LTV-2050) document is a demonstration of the Nigeria’s commitment to playing a leading role in the implementation of the Paris Agreement. Minister of State for Environment, Mrs. Sharon Ikeazor said this at a formal presentation of the country’s low emission vision policy […]

Mali’s military-dominated government has “strongly” condemned “illegal” sanctions imposed on the West African country by the Economic Community of West African States (ECOWAS), adding that it has closed its land borders “with the states concerned”. On Sunday, ECOWAS and the West African Economic and Monetary Union (UEMOA) imposed a raft […]

Internet services have been restored in Kazakhstan’s largest city following a five-day blackout. Since Wednesday, Almaty, the country’s former capital, has been offline amid a wave of violence in the country. According to the Interior Ministry said on Monday, almost 8,000 people have been detained throughout the country. The demonstrations, […]

Rivers state governor, Nyesom Wike has declared 19 persons wanted for operating illegal refineries in Rivers. He made the declaration during a broadcast in Port Harcourt, threatening to expose more accomplices of illegal refiners. Wike directed the Head of Service of Rivers State to query and possibly recommend the prosecution […]

Vice-President Yemi Osinbajo says the Economic Community of West African States (ECOWAS) will not accept unconstitutional takeover of power. Osinbajo made this known on Sunday in Ghana where he represented President Muhammadu Buhari at an extraordinary ECOWAS summit to discuss the political situation in the Republic of Mali. In August […]

An Australian judge on Monday has found the government’s decision to revoke Novak Djokovic’s visa to enter the country as “unreasonable” ruling that the tennis star be released from immigration detention immediately. Judge Anthony Kelly ordered Djokovic be freed within 30 minutes and his passport and other personal documents returned […]

…To Inaugurate Multiple Infrastructural Projects President Muhammadu Buhari will embark on a state visit to Ogun State on Thursday, January 13. During the visit, he will inaugurate some of the infrastructural projects executed by Governor Dapo Abiodun. According to a statement by Kunle Somorin, the Chief Press Secretary to the […]

Colombian Victor Escobar became the first person in the Andean country with a non-terminal illness to die by legally regulated euthanasia late on Friday, his lawyer Luis Giraldo confirmed. “We reached the goal for patients like me, who aren’t terminal but degenerative, to win this battle, a battle that opens […]

A popular Afghan university professor who openly criticised the Taliban’s hardline regime has been arrested in Kabul, a spokesman for the government said. Professor Faizullah Jalal has appeared severally on television talk shows since the previous US-backed government was removed in August, blaming the Taliban for the worsening financial crisis […]

Chelsea goalkeeper Edouard Mendy could miss Senegal’s opening game of the Africa Cup of Nations against Zimbabwe after he was among a new group of players to test positive for Covid-19. According to the Senegalese Football Federation, Mendy, captain Kalidou Koulibaly and forward Famara Diedhiou returned positive results Saturday during […]

Security forces fired tear gas Sunday as thousands rallied in Sudan’s capital Khartoum and a neighbouring city, witnesses said, keeping up pressure on the military following a coup 11 weeks ago. The coup, led by army chief General Abdel Fattah al-Burhan on October 25, derailed a power-sharing transition between the […]

Sanusi To Nigerians: Get Your PVCs To Elect Competent Leaders

Ahead of the 2023 elections, the president-general of the Jam’iyyatu Ansariddeen of Nigeria (Attijaniyya), Muhammad Sanusi II, has advised eligible citizens to get their permanent voters’ card (PVC). He said this on Saturday at the annual conference of the 4th Nigeria World Maulid anniversary in Lokoja, Kogi. The former Kano […]

Harry Maguire admits Manchester United deserve criticism for their dismal performances this season but has denied rumours of disharmony in the dressing room. Ralf Rangnick suffered his first defeat as interim manager against Wolves last week, this was followed by reports of unrest among the players. Maguire said United — […]

The Federal Government has held an interdenominational church service to mark the Armed Forces Remembrance Day. This year’s event held in Abuja is as part of the activities for the annual celebration. It was organised at the National Christian Centre, Abuja and had in attendance the Secretary to the Government […]

A California man charged with assaulting police in the Jan. 6 riot at the U.S. Capitol and using a metal barricade as a battering ram has fled the United States and is believed to have taken refuge in Belarus, federal prosecutors said on Friday.

Farmers in India have political heft due to their sheer numbers — tens of thousands had camped out to protest against the laws in the biggest challenge to the Modi government since it came to power in 2014.

Brazil’s health ministry said its website was hit on Friday by a hacker attack that took several systems down, including one with information about the national immunization program and another used to issue digital vaccination certificates.

Lagos State government has shut 34 medicine outlets at Shomolu, Bariga, Gbagada, Shomolu and Kosofe Local Councils as well as Bale and Savage streets in Orile Iganmu Local Council Development Area of the state for non-compliance to regulatory standards. The Commissioner for Health, Prof. Akin Abayomi who revealed this following […]

Erling Haaland’s agent, Mino Raiola has mentioned Manchester City, Real Madrid, Barcelona and Bayern Munich as clubs the Norwegian star striker could join in 2022. The 21-year-old has a contract with Dortmund until 2024, but his tally of 23 goals in 20 Champions League games for Dortmund and ex-club Salzburg […]

Atiku: Parents Should Be Forced To Send Children To School To Address Insecurity

Former vice-president, Atiku Abubakar, says parents should be forced to send their children to school. Atiku made this known while delivering a convocation lecture on Friday at the Achievers University, Owo, Ondo state. Atiku said countries that invest in education and innovation are leading nations of the world. According to […]

Burkina Faso’s President Roch Kabore on Friday nominated the former head of a nuclear-test-ban agency Lassina Zerbo as prime minister amid an escalating security crisis that has killed thousands and led to street protests.

The lecturers made the call on Friday at separate briefings held in the northern and southern parts of the country where they said the government’s action has left them with no other option than to withdraw their services.

He gave the assurance on Friday at a Virtual Summit for Democracy organised by President Joe Biden of the United States, saying necessary mechanisms would be strengthened to ensure Nigeria witnesses another peaceful transfer of power.

WikiLeaks’ Julian Assange on Friday moved a step closer to facing criminal charges in the United States for breaking spying law and conspiring to hack government computers after Washington won an appeal over his extradition in an English court.