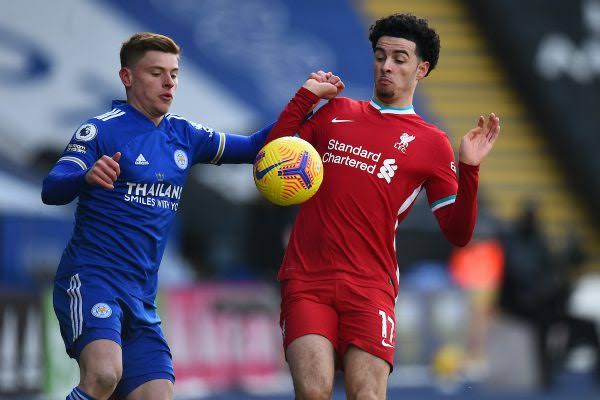 Liverpool’s defeat to Leicester City on Saturday afternoon has compounded their woes in the Premier League.

Goals from Maddison, Vardy, and Harvey Barnes in a space of six minutes at the King power’s stadium means Jurgen Klopp would need to go back to the drawing board.

The Reds who had been under pressure lately with a string of inconsistent results were hoping to put the nightmare display of Alisson against Manchester City behind them when they faced the Foxes.

Fabinho was amongst the latest absentees for the Liverpool side with a muscle issue, while 20-year -old, Ozan Kabak, made his debut partnership in defence with Jordan Henderson

The defending champions were in early ascendancy but couldn’t muster an effort at goal to trouble the Foxes.

Klopp was left to ponder his growing injury list as the game continued when James Milner was substituted off in the 17th minute for Thiago Alcantara.

The first real opportunity of the match presented itself for the Leicester side in the 42nd minute, when a Maddison ball found Vardy who could only see his effort clatter off the bar and travel wide.

The holders continued the second-half as they had started, maintaining their forward momentum, and struck the cross-bar in the 57th minute from an Alexander-Arnold freekick.

The 67th minute saw the Liverpool side break the deadlock with Salah bending a fine strike into the top-left corner after receiving a fantastic pass from the Brazilian Roberto Firmino.

King Power Stadium has not been favourable for the Foxes this season and they were staring at a sixth straight home defeat, not until Maddison’s 78th-minute free-kick changed the tone of the game.

Allison made matters worse for the Reds as a howler allowed Jamie Vardy to get the second and the damage was complete two minutes later as Barnes sent the Foxes into dreamland.

Liverpool are seeking redemption as they face German side, RB Leipzig, in their Champions League round of 16 game on Tuesday.

Popular comedian Debo Adebayo, better known as Mr Macaroni, and 39 other arrested #OccupyLekki protesters have been granted bail. Spokesman for the Lagos State Police Command, Muyiwa Adejobi, made this […]