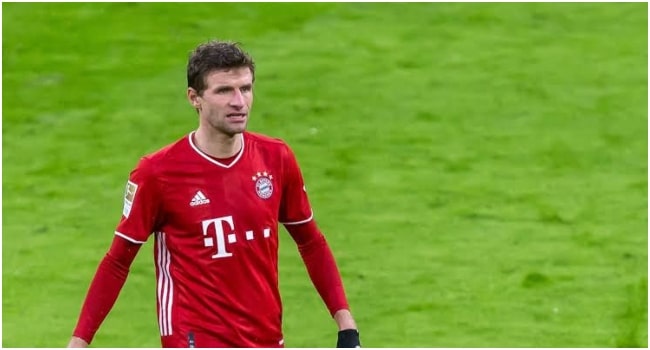 After testing positive for the coronavirus on Wednesday,
Bayern Munich forward, Thomas Mueller would miss out on Thursday’s Club World Cup final in Doha, according to German media reports.

A positive test would rule the veteran striker out of Thursday’s encounter with Mexican CONCACAF champions Tigres in the Qatari capital, in which European champions Bayern are aiming for a historic sixth title in 12 months.

Neither Bayern nor tournament organisers FIFA have yet confirmed the positive test.

Mueller would be the third Bayern player to contract the coronavirus in recent weeks, after positive tests for Javi Martinez and Leon Goretzka meant they were unable to travel with the rest of the squad to Qatar.

His absence would be the latest blow to Bayern’s Club World Cup campaign, after Jerome Boateng returned home to Germany on Wednesday for personal reasons amid reports that his former girlfriend had died.

The Attorney General of the Federation and Minister of Justice Abubakar Malami (SAN), has given reasons the Federal Government is yet to comply with the court order directing it to […]