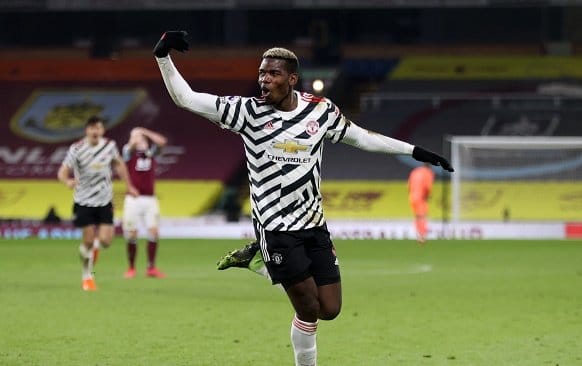 For the first time in three years, Manchester United is back to top of the Premier League table, this is courtesy of Paul Pogba’s deflected winner which saw off a dogged Burnley 1-0 at Turf Moor on Tuesday.

The win makes it the first time since August 2018 that Manchester United will be top of the EPL.

It is also the first time in eight years the Red Devils would be at the summit of the EPL after New Year’s Day since 2013, the year Sir Alex Ferguson won the title and left the club.

The win also ensured Ole Gunnar Solskjaer’s side remain the only team still unbeaten away from home in the EPL this season and are also unbeaten in their last 15 away league games on the road.

United now lead defending champions Liverpool by three points ahead of a top-of-the-table encounter between the two most successful sides in English football history at Anfield on Sunday.

Ole Gunnar Solskjaer’s men have now taken 29 from the last possible 33 points to recover from just two wins in their opening six games of the season.

After a slow start by the visitors, the first-half was dominated by controversy over a series of VAR reviews.

A five-minute delay to review Luke Shaw’s challenge on Johann Berg Gudmundsson and Robbie Brady’s foul on Edinson Cavani as the Uruguayan bore down on goal resulted in both sides escaping without having a man sent-off.

Referee Kevin Friend had initially waived play on from Shaw’s lunge, but on review the left-back was shown a yellow card and Brady’s yellow rescinded as the game should have been stopped earlier in the move.

United then had a goal harshly ruled out when Harry Maguire powered home a header at the back post, but was punished for a slight nudge on Erik Pieters.

The visitors upped the pressure in the second-half as Cavani, back from a controversial three-game ban, missed two big chances he would expect to take.

Pogba was controlling the game from midfield and it was fitting he was the match winner as his volley from Marcus Rashford’s cross deflected off Matt Lowton and through the legs of Pope.

Burnley had chances to equalise late on as Eric Bailly diverted Matej Vydra’s shot just wide before Maguire escaped claims for a penalty for handball.

But United held on for a big psychological boost ahead of the trip to Anfield.

Sowing Seeds and Not looking Towards Harvest

Sowing Seeds and Not looking Towards Harvest