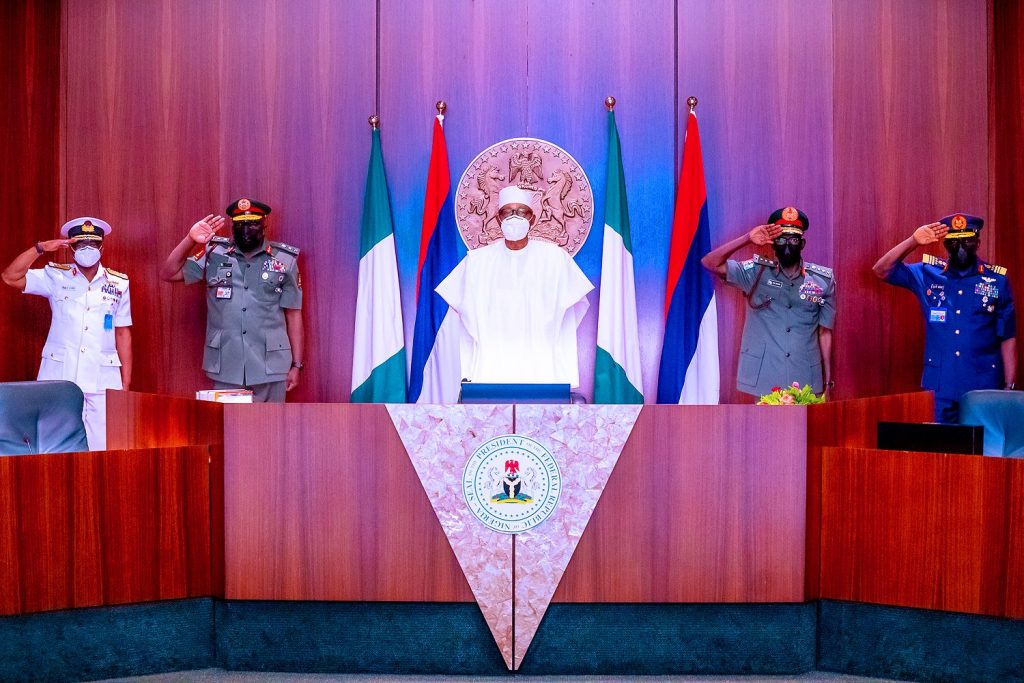 President Muhammadu Buhari has charged the newly-promoted service chiefs to secure the country in the next few weeks.

He said this on Friday while decorating them with their new ranks at the presidential villa, Abuja after the two chambers of the National Assembly confirmed them.

Buhari said it is necessary for citizens to develop the confidence to go back to their farms, adding that the military chiefs must “identify competent officers who will secure the country”.

“During our four-hour security meeting, on Tuesday, I had taken the responsibility as Commander-in-Chief for you to go out into the field and secure the country,” he said.

“You have got a few weeks to do that because by the rainy season, we expect people to develop confidence and go back to the land.

“So that we don’t get into trouble by being away from the field and therefore unable to produce enough food for the nation.”

The President urged the new service chiefs to identify competent officers who will secure the country noting that he had accepted responsibility for their actions in the field.

“I have accepted responsibility for your actions in the field; it’s up to you to identify your competent officers irrespective of seniority and paper qualification and deploy them to make sure that we secure this country.

“We all look forward to you to perform and I as the Commander-in-Chief, I am backing you hundred percent, and I expect you to effectively deploy your officers and men to secure the country.”

Jennifer, the lady who accused Kenneth Petty, husband to Trinidad-born rapper, Nicki Minaj of rape, has alleged attempts by the couple to force her into silence over the case. According […]