Soludo: I’m Not Coming To Learn On The Job 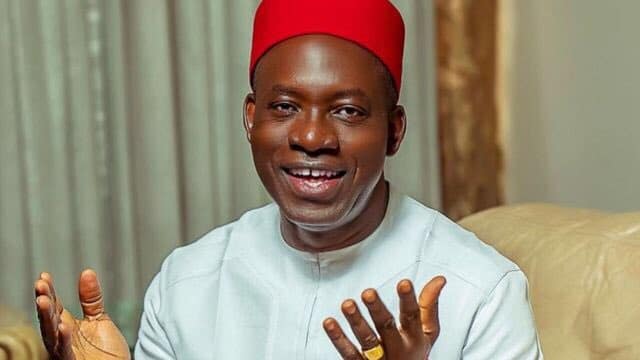 The governor-elect of Anambra State, Professor Charles Soludo, has said that he is not coming on the job to learn.

Soludo, who emerged as the next governor of Anambra State on the platform of the All Progressives Grand Alliance, made this known during an interview on Arise TV.

He disclosed that after the handover in March 2022, he would “hit the ground running”.

Soludo said, “As I said in my manifesto, we are not coming to learn on the job. We have done quite a bit of this in terms of transformation and we would hit the ground running from day one in terms of our agenda.”

While speaking about his transition into becoming the next governor of the state, Soludo noted that it would a smooth exercise.

“Because we have time, we have between now and March as the transition is in March, it is a long process. The good news about the transition is that it is not something happening from the moon. We have people who are experienced. I understand quite a bit; I was the de facto minister of national planning. I ran the building bureaucracy even before, with six parastatal before I went to the Central Bank. So, I clearly understand a few things about how government institutions work; I have been there before.” He said.

“Also, this is an APGA government that is continuing. You have the governor of the state who is our national leader, with all the institutions and structures that are already in place, so we expect a very seamless transition. Most of the people who would be in the transition committee are also already part of the government itself.

“This is APGA government in place and it is just going to be a change of baton at the leadership. The structure and institution is there. The personnel is there; maybe a few tweaks here and there and the train continues to move. We are not expecting any kind of bombshell. This is APGA government and it is steady with its personnel. We will just tweak a few things and we are good to go.”

The professor, who lost his mother at a tender age, had his father walk him through life. However, his father was kidnapped at the age of 78 but later released.

Soludo’s father, who is now 90, has witnessed his son become the next governor of the state.

Speaking about the death of his mother, the governor-elect said, “I don’t want to get very emotional but it is at moments like this that you look back and have nothing but gratitude to the Almighty God. I said it all through the campaign that I am a child from a humble beginning whose grace of God has been upon even from my mother’s womb. I lived without my mother who loved me dearly and had fantastic dreams for me.

“During the campaign, one of the brands that was used to project me to the people of Anambra was ‘Charlie the son of Mbuafor. That actually resonated and for me, it was a very emotional thing. Although she died, she touched our lives immensely and God has been very kind to us.

“In my 30s, I accomplished virtually everything that was there to be accomplished. I became a professor in my 30s, I travelled all over the world and consulted for many international financial and development institutions before I was asked to join the government as an economic adviser. I was the head of national planning and ten months later, I was the governor of the Central Bank. For me, God has been merciful.”

Leaders of U.S., Mexico and Canada To Hold First Summit In Five Years