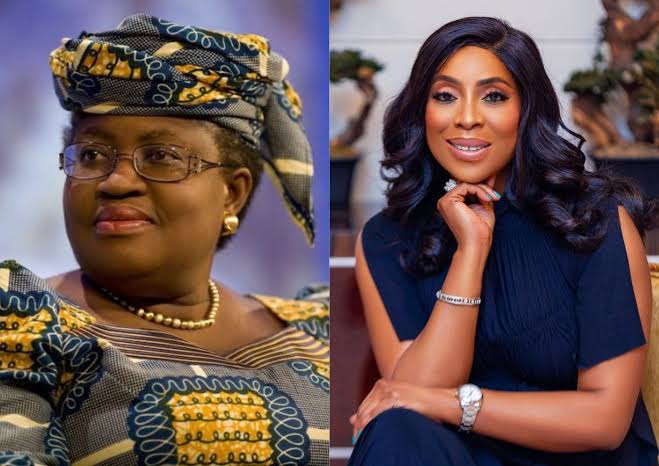 Director-General of the World Trade Organisation( WTO), Ngozi Okonjo-Iweala, and media entrepreneur, Mo Abudu, have been listed by Forbes as one of the 100 most powerful women in the world.

The 2021 list is a definitive survey of foremost CEOs and iconic entrepreneurs, pioneer philanthropists, and policymakers who are solving society’s most intractable problems.

Top of the list is philanthropist, author, and ex-wife of Amazon CEO, MacKenzie Scott, with a net worth of US$62.2 billion, owing to a 4% stake in the company.

Okonjo-Iweala, who became the first female director general of the WTO, was ranked 91st on the list for her policies in pushing trade to lift developing countries out of poverty and actualisation of a sustainable development plan.

According to Forbes, Mo Abudu placed 98th for her “deal with Netflix which marked the first time an African media company signed a multi-title film and TV agreement with the streaming giant.”

Abudu posted on her social media accounts expressing her gratitude for the inclusion among other pioneers on the list.

“I’m humbled and deeply grateful to be amongst some of the world’s most amazing women, including MacKenzie Scott (no. 1), a novelist, philanthropist, and the third-wealthiest woman in the USA, and Christine Lagarde (no. 3), President of the European Central Bank,” she said.

She also recognised her African female counterparts saying: “Women of colour on the list include US Vice-President Kamala Harris (no. 2,) and Oprah Winfrey, making her umpteenth appearance on this list.”

“There are only three African women on the list: Ngozi Okonjo-Iweala, Director-General of the WTO (no. 91), Samia Suluhu Hassan, the current President of Tanzania (no. 94).”

American singers, Rihanna and Beyonce Knowles ranked 68th and 76th respectively on the list, while tennis superstar Serena was not left out of the list placing 85th.

Burkina Faso’s premier and Government resigned on Wednesday, after protests over their inability to prevent Jihadist attacks. President Roch Marc Christian Kabore accepted the resignation letter presented to him by […]