Igboho Apologises For Insulting Ooni, Says ‘My Tongue Was Caught In The Moment’ 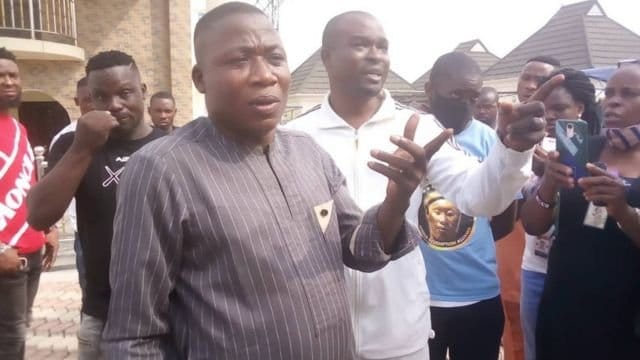 Popular Yourba rights activist and youth leader, Sunday Adeyemo, better known as Sunday Igboho, has apologised to Enitan Ogunwusi, the Ooni of Ife, hours after he described the monarch as a “Fulani slave”.

According to Igboho, the Ooni had failed to tell President Muhammadu Buhari during a meeting in Abuja, the truth about the plight of Yoruba people in the hands of herders.

Igboho had, during a virtual town hall with Yorubas in the Diapora on Wednesday, described Ogunwusi; Bola Tinubu, national leader of the All Progressives Congress (APC); Seyi Makinde, the Oyo governor, and Yoruba politicians in general, as “Fulani slaves”.

“Our leaders are lazy and slaves to Fulanis. They visit Abuja to collect money; we will attack them and destroy their property. Ooni should be dealt with. I am annoyed. Why should we be afraid of the crown they (Yoruba monarchs) wear? Tinubu and other Yoruba politicians are Fulani slaves,” Igboho had said.

Igboho had issued a seven-day ultimatum to herders in Ibarapa area of Oyo state. He blamed them for insecurity in the state.

After confronting the herders in Ibarapa with thousands of youths in the area at the expiration of the ultimatum, he moved to Ogun state on Monday and issued another eviction notice to herders in the south-west.

However, the youth leader, in an interview with Isokan Omo Oodua TV, an online broadcast medium, pleaded for forgiveness from the monarch, whom he described as his father, adding that he was caught in the moment.

“They said I insulted the Ooni of Ife. I and the monarch, as well as the Olugbon, have spoken on the phone. The Yoruba tradition doesn’t permit the insult of elders. But because I was pained by the issue, my tongue was caught up in the moment. I spoke according to how pained I was. It wasn’t the Ooni alone I directed my words at, I also did to other elders,” Igboho said.

“It’s a case of father and child. I and the monarch have spoken as well as the Olugbon. I did not insult the Ooni. And if it appears as if I did, he should forgive me.”