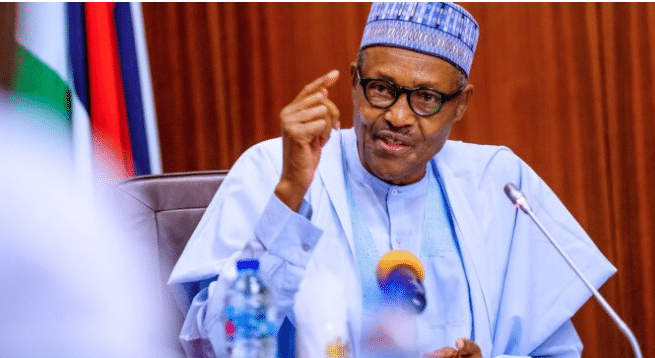 President Muhammadu Buhari said he is impressed with the Katsina state governor, Aminu Masari and the military.

Buhari who was reacting to the release of the Kankara Schoolboys stated this in an interview with the Nigerian Television Authority (NTA) on Friday.

“I am very impressed with him, he has been up and doing since it happened,”

The President noted that law enforcement agencies, the military especially the Army, and the governor worked extremely hard.

He explained that “As as soon as they got them the governor called me and informed and I congratulated him and the army for organizing such operation. The military is well trained, I think they are motivated”.

When he was asked when other Nigerians who are in captivity will be released, Buhari said that his administration is trying its best.

“When we closed our borders we found out that still, the terrorist gets weapons and ammunition, still hold people hostages, collecting millions of naira”. He said

The 78-year-old admitted that the military still had their work cut out for them, but said “some of the things we may not say, I don’t want to compromise the efforts by the security being put in place by the law enforcement officials but our responsibility is to secure the country so I’ll say we have a lot of work to do.”

Recall that on Thursday, hundreds of students abducted from a school in Kankara Local Government Area (LGA) of Katsina State were released.

Governor Masari confirmed the release of the students a week after they were kidnapped by gunmen and met them on Friday at the State House where he assured the the boys that they will be well taken care of.

The governor also assured them that they will each go through proper medical checks while adding that their education will also be taken care of.

The federal government (FG) has directed the cancellation of N20 fee for retrieval of national identity number (NIN) on mobile networks. The National Identity Management Commission (NIMC) had said that […]