Burna Boy: My Mum Gets Angry When I Say I’m Never Getting Married 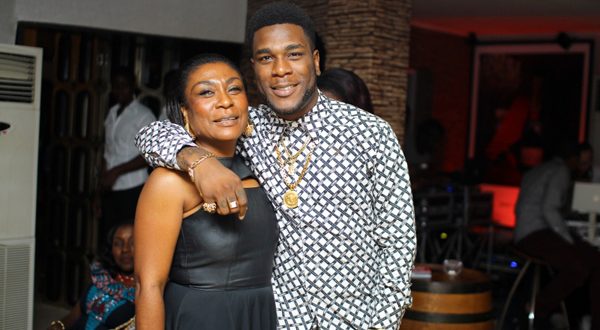 Burna Boy says his mother, Bose Ogulu, hates it whenever he says he’s never getting married.

The Grammy-winning Afrofusion star, has been in a long-time relationship with English rapper, Stefflon Don as the duo has been seen in public events openly displaying romance and affection for each other.

Burna Boy, 30, in an Instastory post, made known his intention about marriage and the position of his mother, who doubles as his manager.

“My mum really hates it so much when I tell her I’m never getting married. She turns red. My own issue is that now I’m not too sure if I mean it or I just say it to piss her off,” he wrote.

In 2020, Stefflon Don had spoken of how he admired Burna Boy and how the ‘African Giant’ crooner told her he wishes to make her his wife.

The British vocalist while gesturing with her hands up-down in the description of Burna Boy’s physique had said “I love everything about him, his toes…everything, every time”

“Nigeria’s lit. I think everyone who has been watching on snap chat, Instagram knows that. It’s an amazing country, beautiful. I love the vibes, parties from dawn till 6, 7 in the morning.”

Burna Boy had also admitted that he intends to raise a child with the UK songstress in a move that fired up their relationship.

“It’s not the business part of us, it’s our life. I’m trying to make it right because I don’t want to bring a kid into this life and everyone is disturbing the kid, wondering what Stefflon Don and Burna Boy’s kid doing,” he had said.

“I want to raise a kid the way I was raised. Being with Stefflon Don is lovely. I don’t know how to explain it.

“It’s just that I try to now kind of like keep it between us. I don’t want to be putting our thing out there in front of everybody anymore. Like you’d be there and you can see it but I don’t want to put it out there for everyone.”

Egypt Lifts State Of Emergency In Force Since 2017

The President of Egypt, Abdel Fattah al-Sisi has announced the lifting of the state of emergency that has been in place since deadly jihadist attacks on Coptic Christian churches in […]