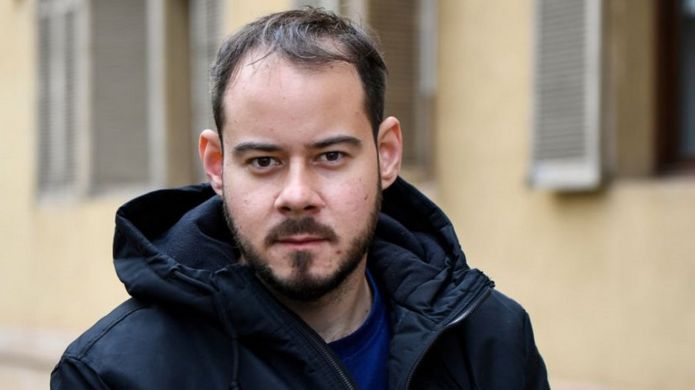 Pablo Hasel, 33, is known for radical leftist views
A Spanish rapper has barricaded himself inside a Catalan university to avoid a prison sentence for tweets and lyrics that attacked the monarchy and police.

Pablo Hasel was given until last Friday to turn himself in, after being sentenced to nine months for glorifying terrorism, and slandering the crown and state institutions.

But he has tweeted that he is with supporters inside Lleida University.

“They’ll have to break in to take me and jail me,” he tweeted defiantly.

Besides attacks on the monarchy, the musician’s tweets and lyrics accused police of torturing and killing demonstrators and migrants.

Lleida University is in the city of Lérida (Lleida in Catalan), 150km (90 miles) west of Barcelona. He is with about 20 supporters there.

The Spanish government plans to reduce the penalty for “crimes of expression” such as the glorification of terrorism, hate speech and insults to the crown and religion, in cases that involve artistic or cultural activities.

In a similar case, another rapper, known as Valtònyc, was jailed for three-and-a-half-years in Spain, but he fled to Belgium where, in 2018, a court decided not to extradite him. He remains wanted under a Spanish arrest warrant.

Congo had kept vaccines for emergency use, officials sayAn Ebola vaccination campaign has been launched in the east of the Democratic Republic of Congo after an outbreak earlier this month, […]