Impeachment Charge Against Trump Delivered To US Senate 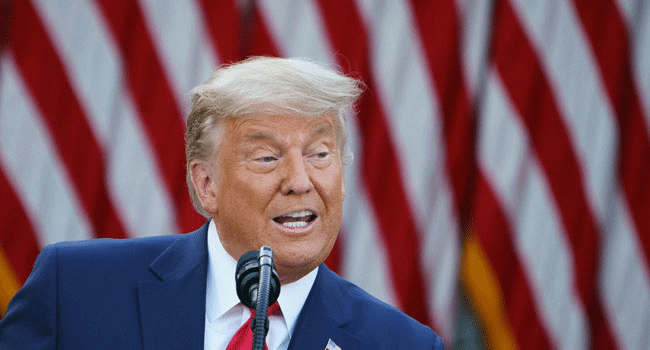 The US house of representatives has on Monday night delivered a single article of impeachment to the senate, which accuse former President Donald Trump of inciting the storming of the Capitol – setting the stage for Trump’s second impeachment trial.

Trump was impeached for a second time on January 13 for encouraging his supporters to invade the congress.

He was first impeached in 2019 but he was acquitted by the senate.

The nine house impeachment managers selected by Nancy Pelosi, the speaker, delivered the impeachment article to the secretary of the senate around 7pm.

Jamie Raskin, the lead impeachment manager, then read it aloud on the floor of the chamber.

The current impeachment resolution charges Trump with just one article: “incitement of insurrection”.

“Donald John Trump engaged in high crimes and misdemeanours by inciting violence against the government of the United States,” Raskin said.

“He threatened the integrity of the democratic system, interfered with the peaceful transition of power and imperiled a coequal branch of government.”

While his trial is to begin the week of February 8, Trump will be issued a formal notice of the impeachment on Tuesday.

Democrats and Republicans had agreed to delay the start of the trial for two weeks to allow Trump to prepare his defence against the charge and for the senate to confirm President Joe Biden’s cabinet appointees.

Chuck Schumer, senate majority leader, said the 100 members of the house, who will act as jurors, will also be sworn in on Tuesday.

Patrick Leahy, Democratic senator and the president pro tempore of the chamber, will preside over the trial.

Leahy said he would take an oath to be impartial.

“When presiding over an impeachment trial, the president pro tempore takes an additional special oath to do impartial justice according to the constitution and the laws.

“It is an oath that I take extraordinarily seriously.”

If convicted, the senate could bar Trump from holding any position again in government, a move that would prevent him from running for president in 2024 which he had hinted after losing and failing to concede the November 3, 2020 presidential election.

The senate could further bar him from receiving $200,000 per year pension as former president.

Democrats control 50 seats in the 100-seat chamber, and a two-thirds majority is needed to convict Trump.

A conviction would require the votes of at least 17 Republican senators, but many are arguing that doing so would be “divisive, unwarranted or even unconstitutional”.

Several Republicans have denounced the plans to try Trump with Marco Rubio, a Florida Republican, saying he would vote to end the trial “at the first opportunity”.

“I think the trial is stupid, I think it’s counterproductive,” Rubio had said.

“We already have a flaming fire in this country and it’s like taking a bunch of gasoline and pouring it on top of the fire.”

Nigeria must restructure to have peace, a former vice president, Atiku Abubakar, has said. He said Nigeria needs peace, unity and prosperity, he however argued that they are dependent on […]