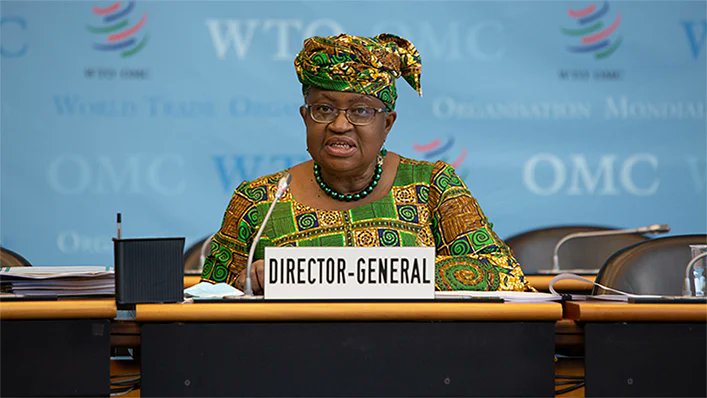 In a tweet on Tuesday, Okonjo-Iweala praised managing director of the IMF, Kristalina Georgieva, and shareholders for the “historic SDR allocation“.

According to the IMF quota, Nigeria will receive $3.35 billion as its share.

SDR is an international reserve asset created by the United Nations specialised agency to supplement its member countries’ official reserves.

According to IMF, SDR allocation is cost-free — does not add to any country’s public debt burden.

The value of the SDR is based on a basket of five currencies – the U.S. dollar, the euro, the Chinese renminbi, the Japanese yen, and the British pound sterling. SDRs are units of account for the IMF, not a currency per se.

The SDRs are allocated based on member countries’ share quotas meaning that much of the reserve assets will be going to wealthier nations.

The WTO DG encouraged countries with a strong foreign exchange (forex) reserve to support poorer counterparts in the fight against COVID-19..

She said poor countries would use the support to mitigate the impact of the COVID-19 pandemic.

“Let me congratulate @KGeorgieva and her whole team as well as @IMFNews shareholders on today’s historic allocation of $650 bill in SDRs which will strengthen members’ reserve positions and assist them to better fight the pandemic,” the tweet reads.

“I urge members with strong foreign exchange reserve positions to channel their SDR allocations to poorer countries, particularly those in Africa, to support their Covid19 fight.”

Reuters had reported that the SDR allocation could increase Nigeria’s external reserves by 20 percent.

In June, Akinwumi Adesina, president of the African Development Bank (AfDB), said G7 countries had also agreed to reallocate $100 billion in their IMF SDR to African states by October.

Governor of Kandahar, Afghanistan’s second-largest city, Youssef Wafa, says the Taliban will not force their rules on anyone as it relates to lifestyle choices. Wafa, however, said “scholars” will make […]