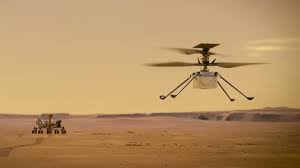 The American space agency has successfully conducted the first controlled flight on another planet on Monday.

The drone, called Ingenuity, flew less than a minute above the red planet, but Nasa is celebrating what represents the first powered, controlled flight by an aircraft on another world.

The rotorcraft was carried to Mars in the belly of Nasa’s Perseverance Rover which landed Feb. 18 after a six-month voyage.

Perseverance deployed the helicopter from underneath the rover earlier this month, with NASA performing a long list of preflight checks during the past two weeks. Perseverance captured Ingenuity’s flight while parked about 211 feet away, and acted as a communications relay between JPL’s mission control and the helicopter.

NASA is promising more adventurous flights in the days ahead. Ingenuity will be commanded to fly higher and further as engineers seek to test the limits of the technology.

“We can now say that human beings have flown a rotorcraft on another planet,” said MiMi Aung, project manager for Ingenuity at Nasa’s Jet Propulsion Laboratory (JPL) in Pasadena, California.

Headline: 7 Hong Kong Democracy Leaders To Be Sentenced Amid Crackdown

Nine of Hong Kong’s leading pro-democracy advocates have been sentenced to jail terms for organizing a march during the 2019 anti-government protests that triggered an overwhelming crackdown from Beijing.