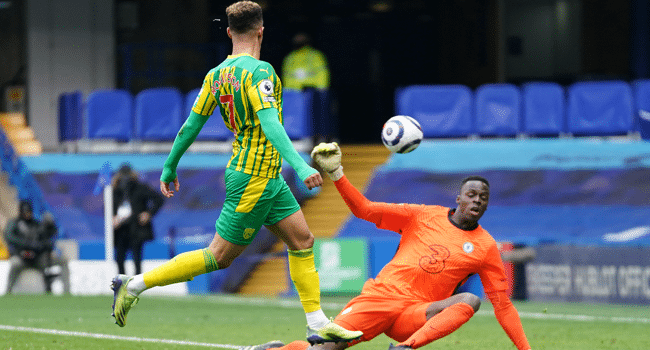 Tuchel had overseen a 14-match unbeaten run in all competitions since replacing the sacked Frank Lampard in January.

But that impressive start came to an embarrassing end as West Brom carried the day at Stamford Bridge.

Christian Pulisic put Chelsea in front early in the first half, only for Brazil defender Thiago to be sent off moments later for a second booking.

His red card proved to be the turning point as Albion’s Matheus Pereira struck twice in first half stoppage-time.

Mason Mount’s reply was no consolation as Chelsea’s bid to qualify for next season’s Champions League through a top four finish in the Premier League suffered a significant blow.

The Blues, beaten for the first time in 10 league games, remain fourth for now, but both West Ham and Tottenham would go above them if they win on Monday and Sunday respectively.

After conceding just two goals in Tuchel’s reign, with seven consecutive clean-sheets since the defence was last breached at Southampton in February, this was a rude awakening for Chelsea.

For the first time since 2011 against Arsenal, Chelsea conceded five goals at home in the league.

It was the worst possible preparation for their Champions League quarter-final first leg against Porto on Wednesday.

West Brom on the other hand, remain second bottom but their first league win at Chelsea since 1978 gives them a glimmer of hope in the fight to avoid relegation.

Thiago was making his first Chelsea start since February 4 after recovering from a thigh problem, but he was completely out of touch on his return.

Mavin Records CEO, Don Jazzy has revealed that he got married 18 years ago to UK-based writer and model, Michelle Jackson. The record producer made this known in a tell-it-all […]