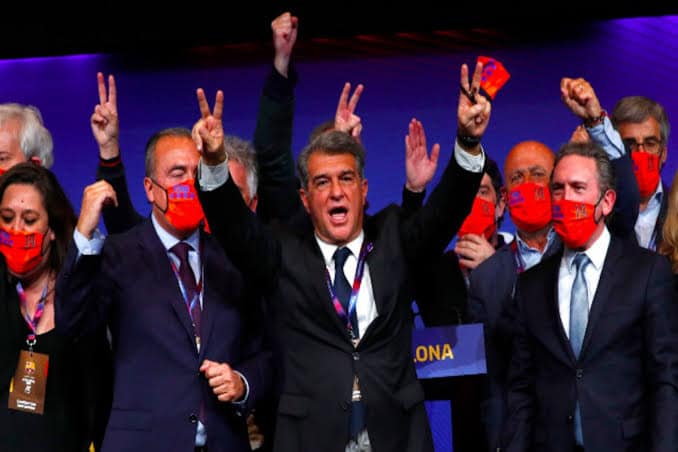 Joan Laporta got elected as Barcelona president again as club members voted him in to replace Josep Maria Bartomeu, inheriting a football club in crisis and facing daunting problems including a huge debt and the possible departure of star player Lionel Messi when his contract elapses at the end of the season.

The 58 year old earned 54 percent of the vote, defeating Victor Font and Toni Freixa in the election on Sunday for the position he previously held between 2003 and 2010.

“I’d like to thank all the club members who have participated in these elections, who make us more than a club, and I think they are the most important elections in the club’s history,” said Laporta in his victory speech.

“We will bring happiness back to Barcelona fans, we will overcome the difficulties. The fans will continue to be the owners of this club.”

After facing a no-confidence vote from club members, Bartomeu stepped down in October 2020 with elections called for January but postponed because of the coronavirus pandemic.

Laporta inherits the club with gross debt of about 1.2 billion euros ($1.4bn), and ahead of Lionel Messi’s contract expiring in less than four months, meaning the captain and forward can walk away for free.

Messi, 33, voted in the election, along with teammates Sergio Busquets, Jordi Alba and Riqui Puig, while former president Bartomeu also voted to choose his successor.

“Twenty years ago, a little boy called Leo Messi made his debut with Barca’s youth team. Seeing the best player in the world come out to vote today is a clear sign of what we keep saying. Leo loves Barca,” Laporta said.

“The best player in the world loves Barca and I hope that is a sign that he will stay at Barcelona, which is what we all want.”

‘Barcagate’
Earlier this month, Barcelona football club plunged into crisis after Bartomeu was arrested by police as part of an investigation into the “Barcagate” social media scandal, relating to a company hired to monitor the club’s online presence.

Bartomeu spent a night in jail while Catalan police investigated possible irregularities during his administration. He has denied any wrongdoing.

A former Minister of Education, Obiageli Ezekwesili says more Nigerian women are not participating in politics because of “self-imposed limitations”. She made this known while speaking at a virtual conference […]