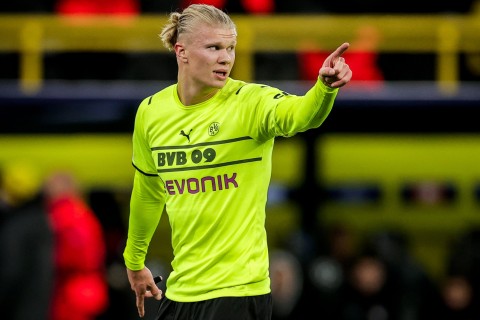 The 21-year-old has a contract with Dortmund until 2024, but his tally of 23 goals in 20 Champions League games for Dortmund and ex-club Salzburg has attracted Europe’s top teams.

The release clause in his contract is reportedly for 80 million euros ($90 million) and it become active in 2022.

Raiola has told broadcaster Sport1 there is “a great chance that Erling will leave” at the end of this season.

“Maybe this summer, maybe the summer after,” Raiola added.

“We all knew when we moved to Dortmund that this step would come.”

The Italy-born football agent plans to sit down with club bosses at Dortmund in the coming months, adding: “We will say what our idea is and they will tell us theirs”.

Haaland has smashed goal records since joining the German club in January 2020.

He became the first player in Bundesliga history to score a hat-trick on his debut as a replacement and has since netted 51 goals in as many German league games.

Dortmund, who currently sit second in Germany’s top flight, was knocked out of the Champions League during the five weeks Haaland was recently sidelined by a hip problem.

The injury also proved costly for Norway, who missed out on qualifying for the 2022 World Cup in Qatar when they lost 2-0 to the Netherlands last month when Haaland was sidelined.

Atiku: Parents Should Be Forced To Send Children To School To Address Insecurity

Former vice-president, Atiku Abubakar, says parents should be forced to send their children to school. Atiku made this known while delivering a convocation lecture on Friday at the Achievers University, […]