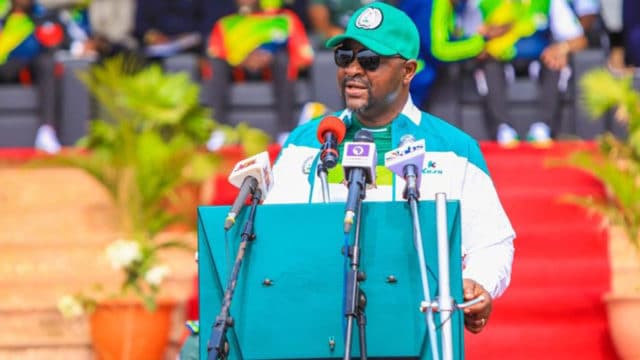 Minister of Youth and Sports Development, Sunday Dare, says the resumption of the Nigeria Professional Football League is a big relief after months of uncertainty.

Dare stated this on Tuesday in a statement signed by the Media Office to the Minister of Youth and Sports Development.

The statement quoted Dare as saying that, “Truly, it is really a sign of relief to see the NPFL return. You can see the excitement on the social media and economic activities in different venues, talking about the hotels, restaurants and hosts of others who are beneficiaries of the restart of the league,”

“The return of the league brought about economic gains and it will reduce social vices among the youths.

“Even the gladiators of the game are not left out of the party, players get travel allowances, referees, match officials and as well as backroom staff.”

The minister also commended the efforts of the League Management Company in ensuring that the NPFL returned, assuring that the ministry would give them full support.

“I want to commend the LMC for restarting the league. As a ministry, we will support LMC to grow the league, which is critical for sports development in the country.”

16 out of every 100 samples tested positive, says PTF

Chairman of the presidential task force (PTF) on COVID-19, Boss Mustapha says within one week since Nigeria entered the second wave of infections in December, 16 out of every 100 […]