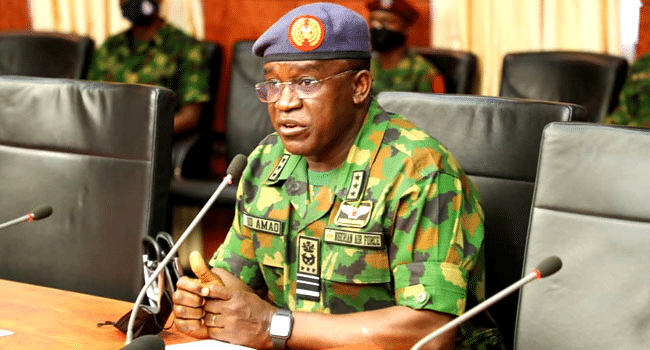 This assurance was give during an Easter Lunch with the personnel of 013 Quick Response Force Minna, where he commiserated with families and colleagues of the three Airmen who lost their lives in Allawa operations on 1st April 2021.

The Air Chief reiterated the commitment of President Muhammadu Buhari and the Nigerian Air Force towards ensuring that insurgency and armed banditry are put to an end.

The Chief of Air Staff who was represented by Air Vice-Marshal Remiqius Ekeh commended the 013 Quick Response Force and Air Component of Operation GAMA AIKI as well as the gallant officers, airmen, and airwomen calling on them to remain resolute in the fight against insurgency and banditry.

He told them not to relent in their dedication and hard work towards achieving the mandate of protection of lives and properties of Nigerians.

He also stated that efforts are ongoing to recover the crashed NAF Alpha Jet Aircraft which was declared missing on 31st March 2021.

According to him, the claim that the jet was shot down by the insurgents is false.

He promised that available evidence will be made public when investigations are over.

A 2017 song by Davido titled ‘Fall’, has become the first Afrobeats song to hit 200 million views on YouTube. The music video achieved the video-sharing site’s 200-million landmark on […]