Pope Francis Calls For Unity ‘At This Moment In History,’ In Christmas Message 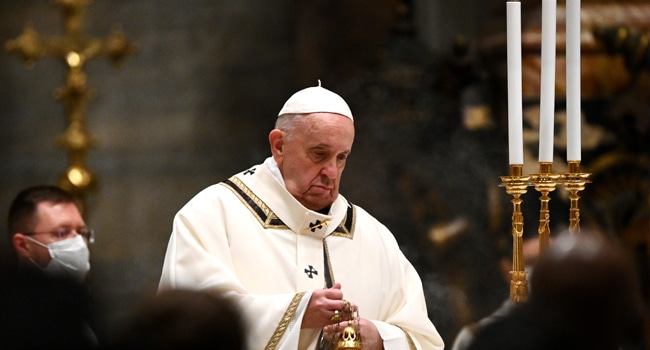 Fraternity is a watchword for these unusually troubled times aggravated by the coronavirus pandemic, Pope Francis said in his Christmas message Friday.

“At this moment in history, marked by the ecological crisis and grave economic and social imbalances only worsened by the coronavirus pandemic, it is all the more important for us to acknowledge one another as brothers and sisters,” he said in his “Urbi et Orbi” message.

This call for solidarity according to the Pope is especially aimed at “people who are the most fragile, the sick and all who at this period find themselves without work or in grave difficulty due to the economic consequences of the pandemic and to women who have been subjected to domestic violence during these months of confinement.”

The pontiff singling out victims in Syria, Yemen and Iraq in his Christmas message also touched on the plight of children caught up by war.

“On this day, when the word of God became a child, let us turn our gaze to the many, all too many, children worldwide, especially in Syria, Iraq and Yemen, who still pay the high price of war,” he said.

“May their faces touch the consciences of all men and women of good will, so that the causes of conflicts can be addressed and courageous efforts can be made to build a future of peace,” he said.

The Vatican said on Monday that the Pope Francis will make a historic visit to Iraq in March — the first ever by a pontiff and which will include a trip to the city of Mosul, a former jihadist stronghold.

The pope has long spoken of his desire to visit the Middle Eastern country, where two decades of conflict has taken a heavy toll on Christian communities.

The Argentinian-born pope called for peace and reconciliation in Libya and Iraq, “particularly to the Yazidis, sorely tried by these last years of war.”

An ace movie producer and screenwriter, Chico Ejiro better known as Mr. Prolific, is dead. According to ChannelsTV, the Nigerian filmmaker died in the early hours of Friday after suffering […]