Over my visit to Buhari, Anyim pulled out of APC defection plan – Umahi 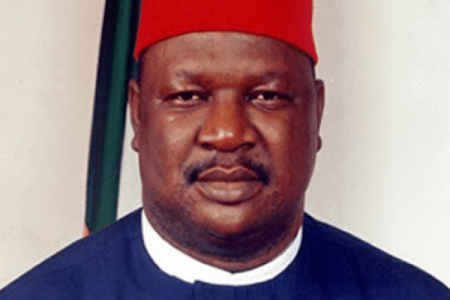 David Umahi, Ebonyi governor, says Pius Anyim, former president of the senate, pullled out of their defection plan to the All Progressives Congress (APC) because he paid a visit to President Muhammadu Buhari without taking him along.

According to the PUNCH, Umahi disclosed this on Sunday while speaking at a stakeholders’ meetings at Ebonyi government house in Abakaliki.

The governor was on November 18 at the presidential villa — a day after he confirmed his defection to the APC from the Peoples Democratic Party (PDP). President Muhammadu Buhari commending Umahi, said with men like him, the country’s democracy has a bright future.

Meanwhile, the Ebonyi national assembly caucus alienated itself from the governor on his decision.

The governor said the plan was for Anyim who was a former secretary to the government of the federation (SGF), to join him in the APC two weeks after he had “successfully” left the PDP.

Umahi said Ebonyi national assembly members decided to defect with him but that they were unhappy because he “outsmarted” them by joining the APC first.

“They were planning to ambush me, but it is difficult to catch the air,” the governor said.

•43 slain farmers buried in Borno •Prof. killed in Benue •10 killed in Plateau, Kaduna Nigerians are grieving over the series of the weekend’s killings in Borno, Benue, Kaduna, Plateau […]