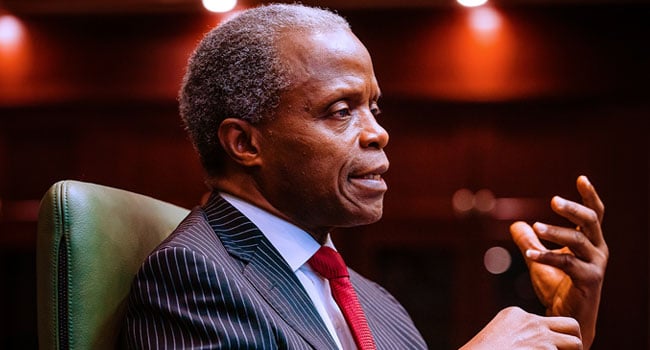 The only way to effectively address the massive infrastructural deficit that exist in Nigeria is through Public-Private Partnership arrangements, Vice President Yemi Osinbajo says.

Osinbajo said this on Thursday at the virtual opening of a two-day retreat of the National Council on Privatisation & Commercialisation Act of 1999.

“The only way to effectively address the massive infrastructural deficit that the country faces is by Public-Private Partnership (PPP) arrangement in one form or the other,” Osinbajo said.

Giving statistics from Nigerian Integrated Infrastructure Masterplan (NIIMP) and the Economic Recovery and Growth Plan (ERGP) 2017-2020, Osinbajo noted that “Nigeria will require at least $2.3 trillion over the next 30 years to bridge this gap.”

He added that “The review of budgetary allocation for capital expenditure even over the past decade will show that government resources are completely insufficient for this purpose.”

According to the Vice-President, the government can take either commercial or concessionary loans for infrastructure development, this is an additional burden on a usually considerably leveraged balance sheet.

“There is a large pool of investable funds from both local and international investors for the development and maintenance of infrastructure. But these are only accessible where there is a business case to be made for developing public infrastructure.

“So, for both institutional and individual investors, there is far more comfort with lending or with equity participation were a private sector entity partners with a public authority owner of the infrastructure. This way the public partner can play its natural role of a regulator (regulation and policy), leaving the business to the private sector whose reason for being in business. So, for investors, PPP presents the best of both worlds,” Prof. Osinbajo added.

Earlier in his opening remarks at the event, the Director-General of BPE, Alex Okoh said the current economic environment requires the government to adopt innovative ways of attracting resources for infrastructure development.

Okoh said an amendment of the BPE Act will among other things expand private sector participation in the Nigerian economy as well as attract more foreign capital to different sectors of the economy.

Dignitaries at the opening session of the programme include the Minister of Industry, Trade and Investment, Niyi Adebayo; the Senate Committee Chairman on Privatisation, Senator Theodore Orji; representatives from the office of the Attorney General of the Federation, the Central Bank of Nigeria (CBN), and members of the National Council on Privatisation, among others.

Headline: ‘I Have No Political Godfather Except God’ – Seyi Makinde Declares

Oyo State Governor made this known at a pan Yoruba congress held on Wednesday in Ibadan, the Oyo state capital. “I have no political godfather except God the father. God […]