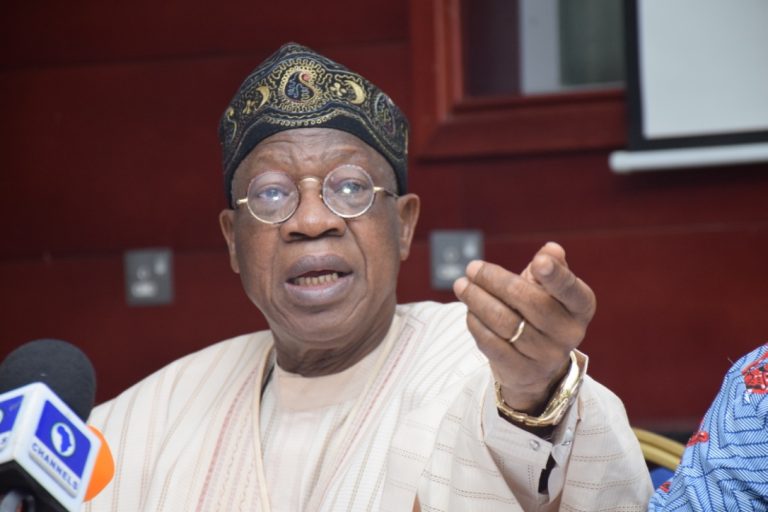 Nigeria’s minister of information and culture, Lai Mohammed, has demanded that Amnesty International (AI) show proof of the 12 people reportedly killed during the shooting at the Lekki toll gate or “shut up”.

Amnesty International on Thursday issued a statement alleging that the Nigerian authorities have resorted to intimidating demonstrators and covering up the incident, instead of ensuring justice for those killed.

The statement was issued to commemorate 100 days since October 20, 2020, when soldiers stormed the Lekki toll gate where #EndSARS protesters had gathered.

AI also demanded that officials indicted in the alleged shooting of #EndSARS protesters at Lekki, Lagos state be suspended.

However, Lai Mohammad in an interview with NAN on Thursday, said the human rights organisation is gradually losing credibility, and urging AI to come out with evidence of the people allegedly killed by the military.

“They will soon lose their respect and credibility if they continue to operate this double standard,” Mohammed said.

“If Amnesty International has any proof, it should come out with it or shut up.

“After a lot of dillydally, Amnesty International said 12 people were shot at the Lekki tollgate. They should take advantage of the judicial panel of enquiry set up by Lagos state to tell the names and addresses of the 12 people they claim were shot at the toll gate.”

The information minister also accused AI of double standards in its reaction to issues happening in Nigeria and other countries citing the example of the Capitol Hill invasion in the United States.

“American government has vowed that they will search, arrest and prosecute anybody involved in the attack on Capitol Hill,” he said.

“When Nigeria wanted to arrest and prosecute those hoodlums responsible for the killing of 37 policemen, six soldiers during the EndSARS protest, Amnesty International will find fault.

“At the Lekki toll gate incident in Lagos, they described the hoodlums as peaceful protesters, while the people who invaded Capitol Hill in the US were called insurrectionists.

“When the US government denied the investigators from the International Criminal Court visa to enter the US, we did not hear a word from Amnesty International.”

Amnesty International has accused the Nigerian government of covering up those responsible for the shootings of #EndSARS protesters at Lekki toll gate and Alausa in Lagos State in October 2020. […]