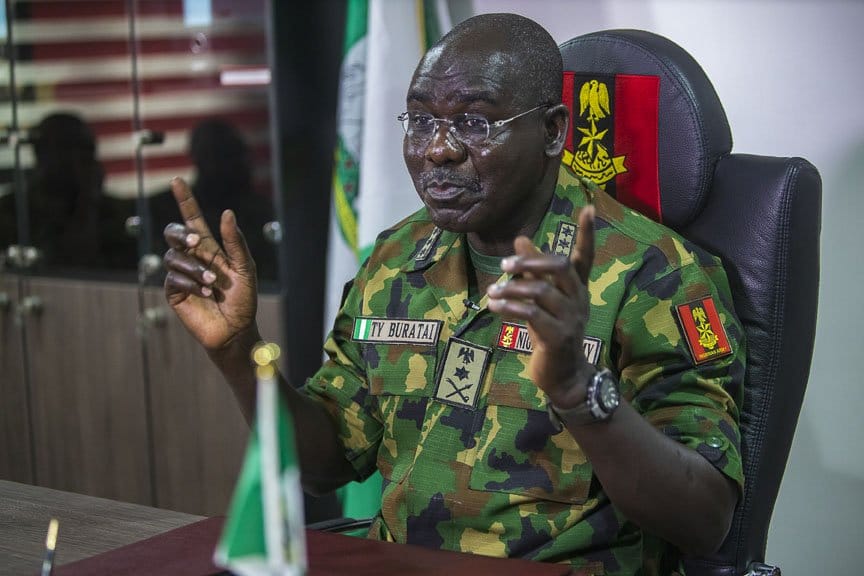 The immediate past Chief of Army Staff, Lt. Gen. Tukur Buratai (rtd), has downplayed criticism of his nomination as ambassador-designate, saying he performed creditably well during his tenure.

He cited the compilation by officers at the Army Headquarters on projects and infrastructural development he embarked upon across the country as evidence of his good job.

Buratai spoke on Sunday night in Abuja at a dinner organised in his honour by members of 29th Regular Course Association.

Commenting on his appointment as an envoy and that of his colleagues, Buratai said: “It’s an honourable retirement and also an honourable appointment. I’m not a politician, so, I have no word for the opposition. I have done well.”

Speaking also on his tenure as COAS, he said: “I am happy that in July last year, my officers at the Army headquarters compiled a compendium of my achievements.

“Since I was appointed, there was never a dull moment in terms of training. Remember the various exercises. These are training exercises from ‘Python Dance,’ ‘Crocodile Smile,’ and even the latest one ‘Exercise Sahel Sanity,’ “Is it in the area of medical? In terms of education of our children and wards, the Nigerian Army University are all great achievements.”

The former army chief thanked the President for appointing him as chief of army staff, reiterating that he discharged his responsibilities to the best of his ability.

He also praised Nigerians that supported him with prayers, advice and words of encouragement that made him achieve so much as COAS.

“I must appreciate all Nigerians, my well-wishers, the youths, elders, men and women for their continuous prayers, goodwill and support to the Nigerian Army and me in the course of our duties to bring about peace and security in our country,” he added.

He also thanked the Borno State Governor, Prof. Babagana Zulum, and his North-east counterparts, who have “all worked hard to ensure that the insurgency in the region has reached what we have today; a manageable state and the progress has been quite tremendous so far.”

Buratai said his appointment was a special price for his father, the late Alhaji Yusufu Buratai, a well-known staunch loyalist of Buhari.

He also thanked members of the 29th Regular Course Association for being such wonderful friends and course mates and organising such a befitting event in his honour, adding that he felt so happy to be celebrated.

He said the honour meant a lot to him and his family.

“It is also a mark of fulfilment and pride that you have been recognised for the service you have rendered to your nation and your people,” he stated.

Buratai assured them that he would continue to do the nation proud and project Nigeria’s image in good light wherever he is posted.

The Minister Of Youth and Sports Development, Sunday Dare, says the 20th edition of the National Sports Festival (NSF) has been postponed due to COVID-19. This the fourth time that […]