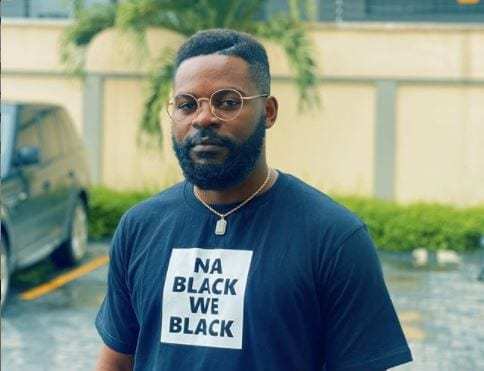 Nigerian rapper, Falz, says the arrests of some #OccupyLekkiTollGate protesters indicate that the federal government is not committed to getting justice for victims of #EndSARS protesters killed last year.

Operatives of the Nigerian army had stormed the Lekki tollgate on October 20 2020, opening fire on unarmed youths protesting against police brutality in the country.

The development had generated widespread outrage with many demanding justice for those killed during the incident.

But while the dust trailing the incident appeared to have reduced, youths again regrouped on Saturday to protest against the reopening of the tollgate.

However, security operatives stormed the protest ground in “a show of force” arresting protesters including a popular comedian, Mr Macaroni.

The arrests of the protesters have since sparked controversies on social media platforms with many Nigerians expressing different views over the issue.

In his reaction, Falz said the Nigerian government has yet again demonstrated its unwillingness to uphold the rule of law and sustain the country’s democracy.

“@mrmacaroni1 and a number of other innocent Nigerians have just been arrested at the Lekki Toll Gate for exercising their fundamental human right to protest,” he wrote.

“The Nigerian government has shown by this senseless act that it is not concerned with upholding our democracy or the rule of law.

“They are basically showing that they are not interested in serving justice as regards the 20th of October incident.”

He added that the use of force by the government to intimidate protesters will not dissuade people from coming out to demonstrate until their demands are addressed.

“This show of force is supposed to make us fear for our lives, but the life we dey live no kuku get meaning before,” he added.

“Absolutely nothing to lose at this point. They better be ready for the consequences of these actions.”

A veteran singer and activist, Charles Oputa, better known as Charley Boy, had earlier condemned the arrests, noting that such showed the country has become a “jungle”.

The Oyo State Government on Saturday directed the immediate closure of Shasha market in Akinyele Local Government Area of Ibadan. The market was closed after an ethnic clash occurred on […]