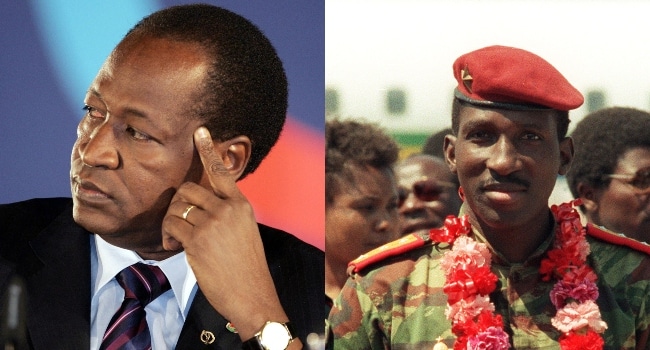 Former President of Burkina Faso, Blaise Compaoré, has been charged with the murder of his predecessor, Thomas Sankara.

According to Reuters, Compaoré was charged in absentia by a military tribunal on Tuesday with complicity in the assassination, undermining state security, and receiving cadavers.

Compaoré had in October 2014, stepped down and fled to Ivory Coast, due an uprising that followed his attempt to amend the constitution to extend his 27-year administration.

He partook of the coup d’état that toppled Jean-Baptiste Ouedraogo on August 4, 1983, and subsequently produced Thomas Sankara as president.

Compaoré took over power on October 15, 1987, in a coup which led to the death of Sankara, which he had described as “an accident”.

Compaoré’s former right-hand man, Gilbert Diendere, who was present at the court, was also charged with several crimes which relates to Sankara’s killing, including complicity in the assassination — he was sentenced to 20 years in prison.

Another Compaoré loyalist, Djibril Bassole, a former foreign minister who was accused of being the coup’s mastermind, was also sentenced to 10 years in prison for treason.

During his time in office, Sankara was praised for his efforts to improve the economy through local production, as well as promoting policies to reduce excessive spending by public officials.

Plateau State Governor, Simon Lalong said the implementation of autonomy will require each state to establish a house of assembly service commission, with the responsibility of handling all the administrative […]