Abductors Of Students Have Contacted Us, Masari Tells Buhari 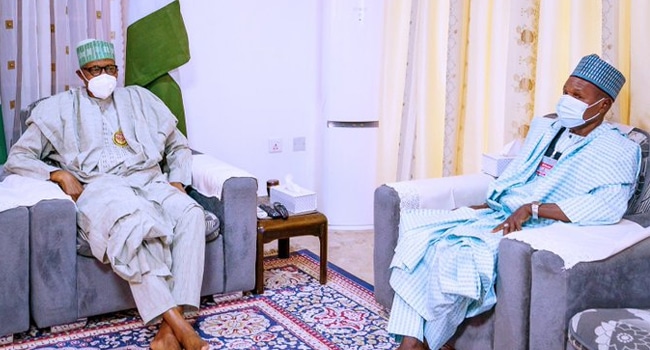 Katsina State Governor, Bello Masari on Monday told President Muhammadu Buhari that the abductors of students in Kankara Local Government Area of the state have contacted them.

“The Governor, who was accompanied by the Deputy Governor of the state, Manir Yakubu, said the kidnappers had made contact and discussions were already on pertaining to safety and return to their homes,” the Senior Special Assistant to the President, Garba Shehu said in a statement after Masari’s visit to Buhari in Daura.

He expressed optimism that based on efforts made so far, “the outlook is positive.” explaining that security agencies had located the position of the children.

Governor Masari, accompanied to the visit by his deputy, Manir Yakubu, noted that President Buhari was committed to the rescue of the schoolchildren.

The 70-year-old former Speaker of the House of Representatives stated that it was only appropriate to visit the president and give him more details of rescue efforts.

Police authorities said they were told that the bandits were armed with AK-47 rifles and they received a report of the attack around 11:30 pm.

Initially, there were conflicting figures as to the number of students abducted during the attack but on Sunday, Governor Masari confirmed that three hundred and three schoolchildren were missing from the school.

“We are still counting because more are coming out from the forest and we are calling through the numbers those parents that have phone numbers to find out whether or not their children have gone back home,” he said when he received a federal government delegation led by the National Security Adviser, Babagana Monguno.

The attack prompted the Katsina State Government to order the closure of all boarding schools in the state, a move aimed at forestalling similar occurrence.

Rivers State Governor, Nyesom Wike, has said his criticism of the National Working Committee of Peoples Democratic Party should not be misunderstood to mean that there is an irredeemable crisis […]