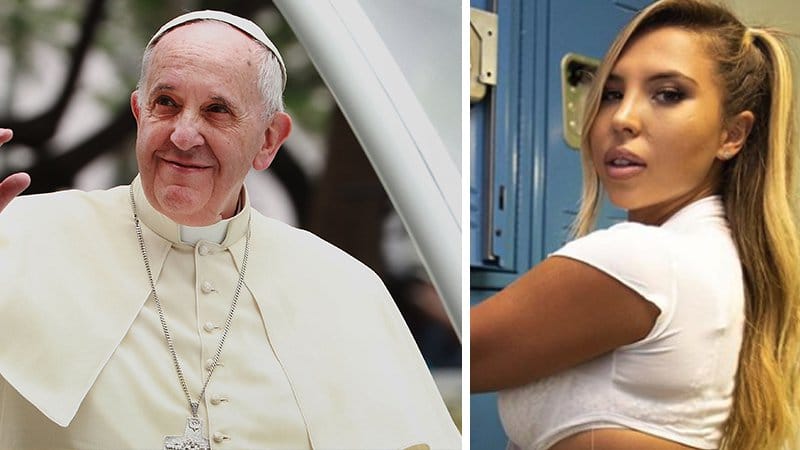 An investigation has launched by the Vatican into how Pope Francis‘ official Instagram account “liked” a photo of an almost naked Brazilian bikini model Natalia Garibotto.

The Catholic News Agency (CNA) asked the Holy See Press Office for comment after the screenshot of the misplaced Instagram “like” appeared on social media on November 13 but the photograph was unliked on November 14.

The controversial picture showed Garibotto dressed in a revealing tartan ‘skirt’ and suspenders leaning against a locker with most of her posterior visible in view.

The image was captioned: “I can teach you a thing or two 😈 can’t wait for you guys to see my October shoot.”

The pope’s various social media accounts according to confirmation from sources close to the Vatican press office are managed by a team of employees and an internal investigation is underway to determine how the “like” happened.

Afterwards, Natalia Garibotto, who goes by the username Nata Gata took to Twitter saying that “At least I’m going to heaven.”

In another tweet, she wrote: “Brb on my way to the Vatican.”

The 27-year-old model confessed to Barstool Sports that she was flattered that the Pope’s Instagram account saying: “My mum may hate my a** pics but the Pope be double-tapping.”

Reports from CNA has it that Garibotto’s management and publicity firm known as COY Co., , used the papal account’s like for publicity purposes, posting on its account Friday that the firm had “received the POPE’S OFFICIAL BLESSING.”

“Now that’s my kind of Pope,” another said.

Following criticism of how he handled a mink cull order after the discovery of a mutated version of the coronavirus at some of the country’s mink farms, Denmark’s agriculture minister […]