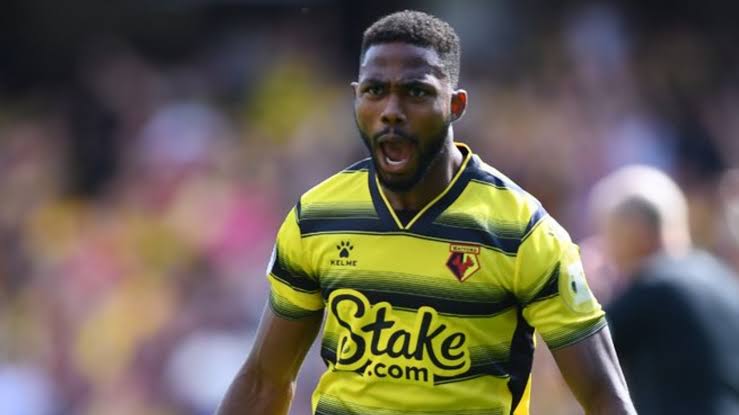 His goal against Leicester City at the King Power Stadium also means that he is only the sixth player in the competition history after Eric Cantona (11), Jurgen Klinsmann (12), Arjen Robben (11), Andrey Arshavin (10) and Bruno Fernandes (9) to have achieved that feat.

The Super Eagles striker joined the Watford from Club Brugge in the last transfer window and has become an instant hit for the Premier League side.

The 24-year-old scored Watford first goal since their return to the top-flight league in their 3-2 win against Aston Villa in August.

He also got the Hornets their first away goal of the 2021/22 season in their 3-1 over Norwich City. His other victims in the Premier League includes Everton and Manchester United.

Only Liverpool’s Mohamed Salah outshines Dennis, a situation that was probably not imagined in August.

Meanwhile, the prolific striker picked up an injury in their 4-2 loss to The Foxes and was replaced by Ashley Fletcher in the 71minutes.

“With Dennis and Masina, I’m not sure at the moment. Tomorrow we’ll check everybody because Dennis came out and Masina didn’t finish well,” Claudio Ranieri was quoted as saying on the club’s website.

Before his injury, Dennis turned fellow countryman Wilfred Ndidi in the box, inviting the Leicester City midfielder to stick out a careless leg, which forced referee Andrew Madley to point to the spot.

Canada said on Sunday that it has detected its first cases of the new Omicron strain of Covid, in two people who had traveled recently to Nigeria. According to federal […]