McConnell defends vote to acquit Trump: ‘Our job was to defend the Constitution and respect its limits’ 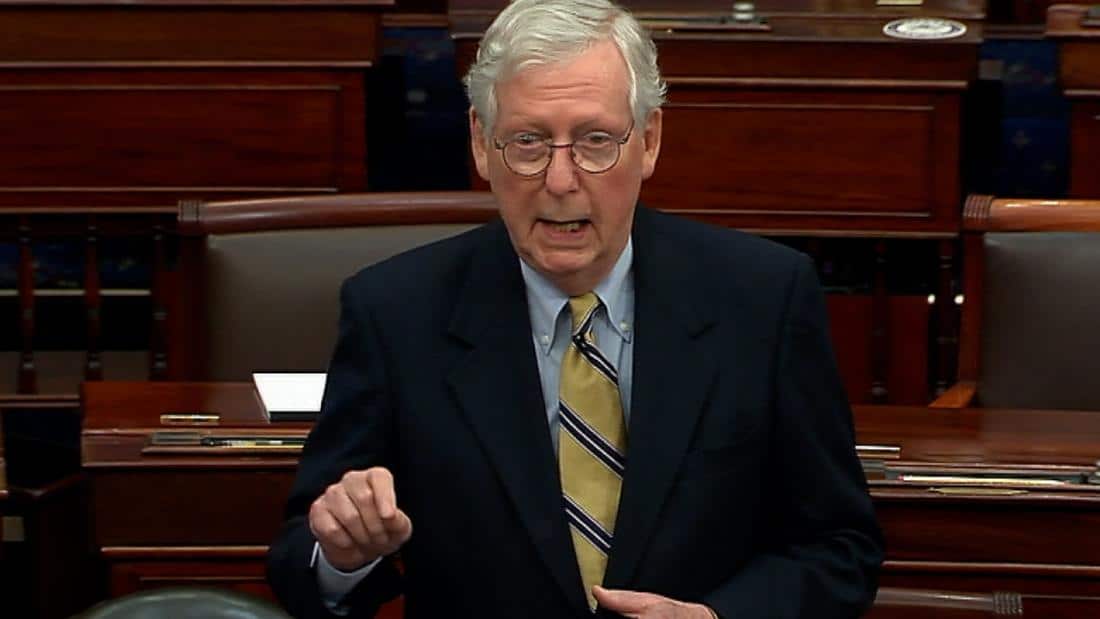 Senate Republican leader Mitch McConnell on Monday rebuked Donald Trump’s incitement of the January 6 insurrection at the US Capitol while doubling down on his vote to acquit the former President of the charge.

“There is no question former President Trump bears moral responsibility,” McConnell wrote in an op-ed in the Wall Street Journal of the riot. “His supporters stormed the Capitol because of the unhinged falsehoods he shouted into the world’s largest megaphone. His behavior during and after the chaos was also unconscionable, from attacking Vice President Mike Pence during the riot to praising the criminals after it ended.”

“I was as outraged as any member of Congress,” the Kentucky Republican continued. “But senators take our own oaths. Our job wasn’t to find some way, any way, to inflict a punishment. The Senate’s first and foundational duty was to protect the Constitution.”

He added that “after intense study, I concluded that Article II, Section 4 limits impeachment and conviction to current officers.”

McConnell’s comments echoed those he made during remarks on the Senate floor shortly after Trump was cleared in a 57-43 vote, when he suggested that the former President could be subject to criminal prosecution in the future.

During the trial, most Republican senators said they would vote to acquit Trump because they believed the trial was unconstitutional — an issue that the Senate had already voted on during the first day of the trial. But not all Republicans appeared to view the votes on constitutionality and whether to convict or acquit in the same way.

McConnell had not committed publicly on how he would vote prior to doing so.

In Monday’s op-ed, McConnell lambasted critics of the constitutionality argument.

“What deserve no respect are claims that constitutional concerns are trivialities that courageous senators would have ignored,” he wrote.

McConnell also dismissed prior calls for him to hold the trial while Trump was in office, saying it had been impossible to do legitimately and accusing Democrats of being overly willing to shirk precedent for their benefit.

“The nation needs real constitutional champions, not fair-weather institutionalists,” he wrote. “The Senate’s duty last week was clear. It wasn’t to guarantee a specific punishment at any cost. Our job was to defend the Constitution and respect its limits. That is what our acquittal delivered.”

McConnell’s criticism of Trump and professed commitment to a constitutional interpretation align with long-brewing tensions between the two over Trump’s handling of the Capitol attack and its aftermath.

CNN reported last month that McConnell had indicated he believed that impeaching Trump would make it easier to get rid of the former President and Trumpism from the Republican Party, according to a source with knowledge of the matter.

In the last weeks of Trump’s presidency, the relationship between the then-Senate majority leader and the former President — the two most powerful men in the Republican Party — had essentially collapsed, multiple sources told CNN.

China vaccine has vaccinated about 40 million people to date.China has arrested the leader of a multi-million dollar scam that passed off saline solution and mineral water as Covid-19 vaccines. […]