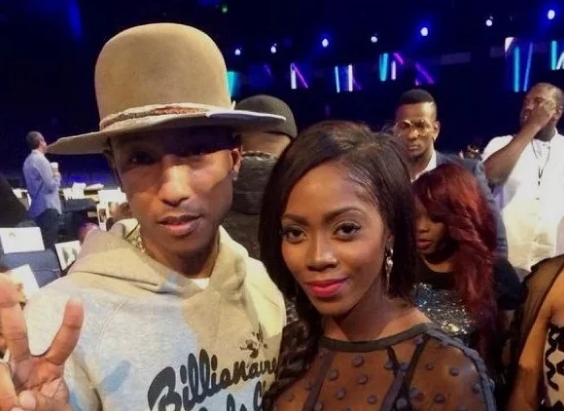 US singer, Pharrell Williams, has described an upcoming extended play (EP) by Tiwa Savage named ‘Water and Garri’, as a “classic” project.

Williams could be heard in a video shared on her Instagram page, sharing his thought about the body of work.

The Grammy-winning artist, who seemed to have listened to the EP, opined that they’re not commercial songs but classics.

“Anybody that doesn’t get that shouldn’t be listening to music. You’re right, it’s not a commercial song, but that’s a classic,” the renowned producer said.

The 41-year-old songstress, who appeared very happy, noted that she had been doubtful about the acceptance of the music, since it is not commercial.

In a terse note that accompanied the video, the ‘Dangerous Love’ crooner said she is delighted to have the rapper’s view on the body of work, adding that she now needs to pick a date for it release.

“Had @pharrell listen to my EP ‘Water and Garri’. I made music for the soul and one of my favs just confirmed it. I need a date to drop this,” she wrote.

The Pastor and Founder of Christ Embassy Church, Chris Oyakhilome, has announced the birth of his first grandchild, Arielle Rachelle-Marise. The 57-year-old televangelist took to Christ Embassy’s social media app […]