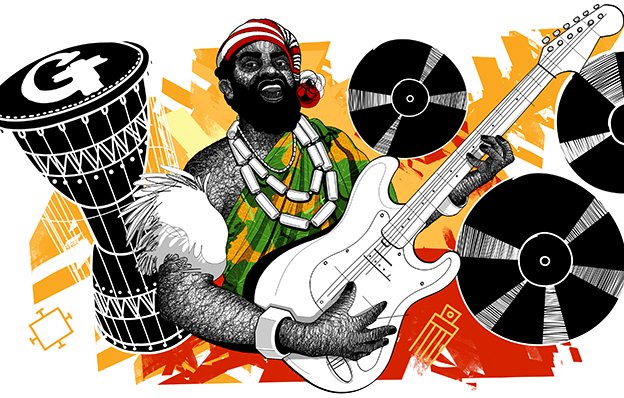 The Google doodle is a special alteration of the logo on Google’s homepage to mark special holidays, events, achievements, and people.

Oliver De Coque began his music career at a young age by playing the guitar before coming to limelight after his impressive performance at a 1970 concert organised by Sunny Agaga and his Lucky Star band.

The iconic musician is renowned for infusing the modern West African highlife genre with a Congolese-influenced guitar style and the energetic dance elements of Igbo music he grew up with, crafting a unique musical style, which he called Ogene.

Until his death, the singer established himself as a household name in Africa’s music landscape with strings of awards and recognition.

The doodle, illustrated by Ohab Tochukwu, a Lagos-based artist, features an image of the legendary musician holding a guitar and clad in his characteristic Igbo traditional attire.

Learn how he strummed his way into listeners’ hearts → https://t.co/6TrNVQvyJi#GoogleDoodle 🎨 by guest artist @OhabTBJ pic.twitter.com/BSFSCb2W7D

In a blog post, Tochukwu disclosed that the doodle was created to further celebrate the heroics of the late singer, adding that “history hasn’t done enough to honour his memory.”

“Although I’ve always been familiar with Oliver De Coque’s music, I did more research to try to understand the late artist more. I noticed in particular Oliver De Coque’s love for the guitar, his energy while performing, his unique style of music, as well as his love for his tradition and culture – all of which inspired the Doodle art,” he said.

“I believe that Oliver De Coque paved the way for so many African artists of this generation. I also believe that there’s much more to the late high-life artist than we know, and that history hasn’t done enough to honor his memory. My hope is that this Doodle can highlight his story.”

British luxury carmaker, Rolls-Royce, has delivered the highest-ever first quarter sales results in 2021, reporting a 62 per cent increase over the same period in 2020. This was made known […]