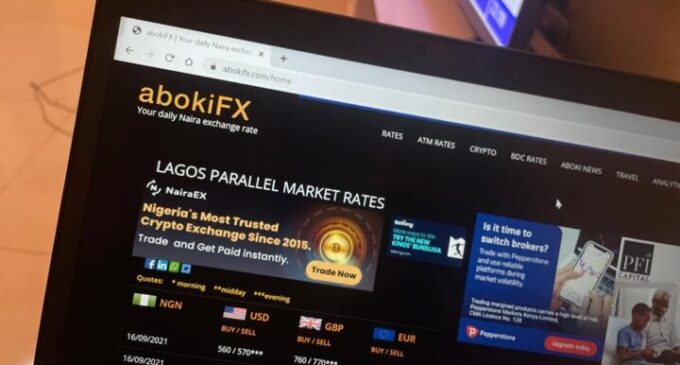 Governor of the Central Bank of Nigeria (CBN) Godwin Emefiele, has confirmed the investigation of the founder of abokiFX, Oniwinde Adedotun.

According to reports, the apex bank on Thursday opened an investigation on Adedotun and abokiFX Limited for “illegal foreign exchange transactions”.

AbokiFX is a web platform that reports movements in the foreign exchange market since as early as 2014.

On the platform, Naira is quoted at 570 to the dollar at the parallel market, though the CBN had described it as an illegitimate market.

“The only exchange rate remains the I&E window, which is the market we expect everybody who wishes to procure or sell forex to get it,” Emefiele said.

“I am sorry to say that I do not, and I do not intend to recognise any fx in the market.

“Go to your bank. Even if your limit is above what the bank is selling, put it forward, and we will look into it.

“If you want to sell the dollar, go to your bank and sell it.”

According to Emefiele the apex bank had been investigating the abokiFX website and its owners in the last two years.

“We have been studying the activities of abokiFX in the last two years,” he added.

“There was a time we asked our colleagues to call the abokiFX to ask how he conducts the rates.

“We cannot allow you to continue to kill our economy.”

The CBN governor added that abokiFX is registered in the United Kingdom, Nov. 2015, and it is owned by one person, who claimed that there are other people with significant interests behind the business.

“Our preliminary findings show that the company continues to file the same cash account in the United Kingdom whereas he maintained about 25 accounts with eight banks in Nigeria — both naira and dollar — milking the system and collecting cash through a particular ATM in London,” the CBN governor said.

“He then sells tens of millions in FX to company’s in Nigeria; we will go after them all.”

“On his UK filings, we will go and conclude the investigation.”

Emefiele alleged that Oniwinde uses his website for forex manipulations and speculations by purchasing forex to make a profit.

“It is completely illegal and unacceptable.”

Governor of Ondo State, Rotimi Akeredolu says southerners won’t support any political party that picks a northern presidential candidate in the 2023 election. Akeredolu said this on Friday during an […]