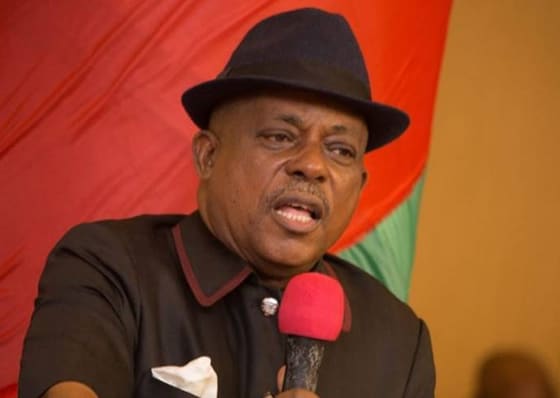 As part of the resolutions reached at the National Working Committee (NWC) meeting on Tuesday in Abuja, the Ebonyi State Executive Committee of the Peoples Democratic Party (PDP) has been dissolved.

The announcement of this decision was made by the spokesman of the party, Kola Ologbondiyan who said the NWC also dissolved the South-east zonal caretaker committee of the party headed by Governor David Umahi’s younger brother, Austin Umahi.

The dissolution followed the decamping of the governor to the All Progressive Congress (APC) from the PDP.

According to Ologbondiyan in a statement, Tuesday night “The National Working Committee (NWC) of the PDP rose from a crucial meeting today (November 17, 2020) and announced the dissolution of the ward, local government and state executive committees of the Ebonyi state chapter of the party forthwith.

“The NWC has also dissolved the South-east Zonal Caretaker Committee of the party.

“These decisions are pursuant to the powers conferred on the NWC by the PDP Constitution.”

Mr Umahi had on Tuesday announced he was joining the APC from the PDP accusing the PDP of not considering the South-east in assigning presidential tickets over the years.

But reacting to the development, the party leadership said the governor left the party for personal reasons.

Meanwhile, Mr Ologbondiyan said “Nigerians will come to know the reasons at the fullness of time”.

“Our party thanks Governor Umahi for services rendered to the people of Ebonyi state, as the State Chairman of Ebonyi PDP (2003 to 2007); deputy governor of Ebonyi State (2007 to 2015) and two term governor of Ebonyi (2015 till date), all elected on the platform of the PDP.”

The party also wished the governor all the best “in his adventure.”

“We call on the members of our party to remain calm and committed to the ideals of our party as no individual is bigger than the PDP,” Mr Ologbondiyan said.

The 2020 Finance Bill on Wednesday has been approved by The Federal Executive Council. This decision was taken at a the council meeting presided over by the President Muhammadu Buhari […]