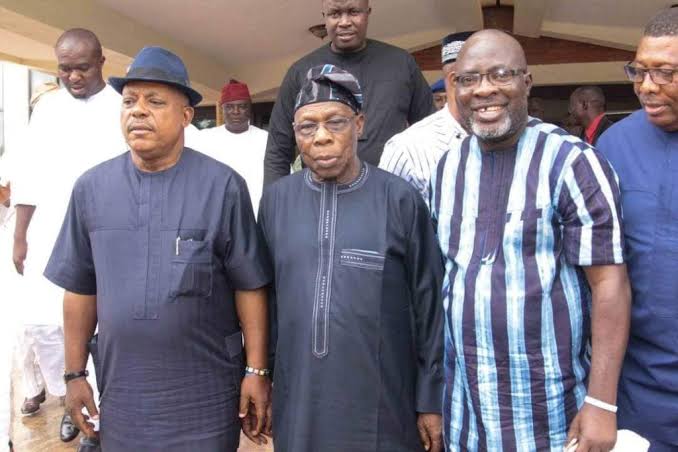 Obasanjo said this on Thursday at his residence in Abeokuta, Ogun state, after a closed-door meeting with the national chairman of the Peoples Democratic Party (PDP), Uche Secondus. The former president said though the Nigerian situation may be bad, it is not irredeemable.

“One thing that Secondus told me that is sweet music in my ears is that although he was here as PDP chairman, he had come to discuss the Nigeria situation,” he said.

“Nigeria is not where it is supposed to be, and may even degenerate if the right things are not done.

“Although the situation may be bad, but it is not hopeless and not irredeemable. I am an incurable believer as far as Nigeria’s destiny is concerned.

“All we need to do is to join hands together to build a common front and forge ahead. I am sure Nigeria will still be better and be great.”

Obasanjo advised Secondus not to prioritise party politics over nation building. “Where it is necessary to wear the party cap, wear it; but where you need to wear the Nigerian leadership cap, please wear it,” he said.

In his remarks, Secondus said he was at former president’s residence to receive advice on how to move the country forward.

“We need the advice of elders to move the nation forward,” he said.

“I am happy about this visit because our elder statesman has rekindled our hope in Nigeria and we are going out with a renewed hope about Nigeria.”

Obasanjo, a founding member of the PDP, renounced his membership from the party in 2015.

Secondus arrived the residence of Obasanjo around 1pm on Thursday, sparking speculations that he is seeking the intervention of the former president in the internal crisis in the PDP.

The PDP national chairman has been under increased pressure of late, with demands for his resignation coming from various quarters.

Amid efforts to reconcile the aggrieved members, the joint committees of the board of trustees of the party said the national convention of the party will be conducted before the end of October.

Meanwhile, the tenure of the national working committee (NWC) of the party, chaired by Secondus, is supposed to end in December.

D’Tigers head coach, Mike Brown, has announced his 12-man roster for the 2021 FIBA AfroBasket scheduled for Rwanda later this month. The list was announced on the verified Twitter handle […]