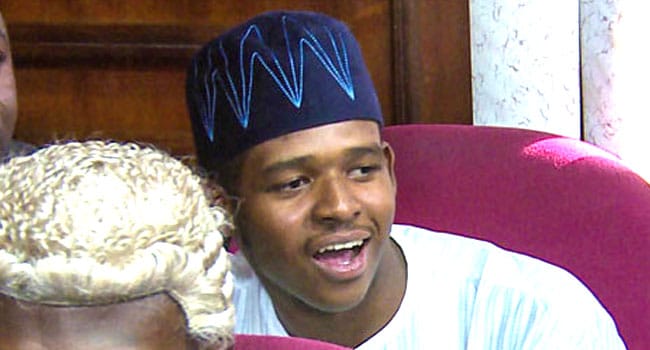 A Federal High Court in Abuja has withdrawn the bail granted to Faisal Abdulrasheed Maina, the son of the former Chairman of the defunct Pension Reform Task Team, Abdulrasheed Maina who is standing trial for alleged fraud to the tune of N58million.

He is also being accused of operating accounts that were used as conduits for illegal transactions.

Justice Okon Abang withdrew the bail of Faisal Maina for failing to appear in court as the defendant was also not represented by a counsel at the resumed trial on Tuesday in Abuja.

Justice Abang also ordered Mister Faisal Maina’s surety to appear in court at the next sitting as he adjourned the trial to November 25, 2020.

The Federal High Court in Abuja had earlier on Tuesday commenced the trial of Abdulrasheed Maina in absentia.

Justice Okon Abang fore-closed their rights to cross-examine the prosecution witnesses who was present in court. This was as a result of the absence of the defendants and their counsels.

The Economic and Financial Crimes Commission (EFCC) is prosecuting Mr Maina for alleged money laundering to the tune of N2 billion.

Ahmad Ahmad, Confederation of African Football (CAF) president has been banned for five years by FIFA for breaching various codes of ethics. The 60-year-old who also doubles as the vice-president […]